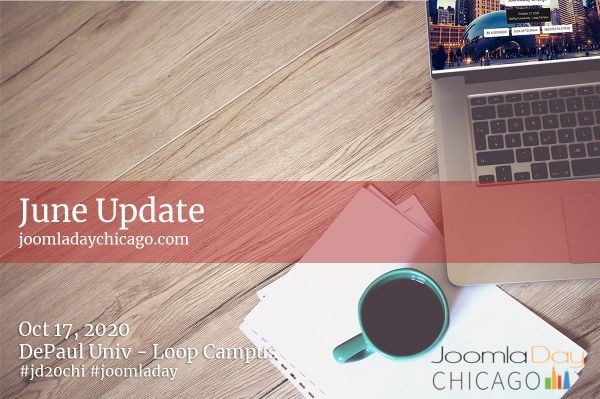 Around the world and here in Chicago, the world is starting to open up again.  The JoomlaDay Chicago team encourages all of you to follow the rules set by your area to stay safe.

I'm going to take a moment to share a bit of history.  I attended my first JoomlaDay event back in 2014 here in Chicago.  It took place right after the Joomla Developer Conference.  It had been an eventful year for me.  I'd celebrated my 1 year anniversary of jumping out on my own and building Joomla sites fulltime.  I'd also stepped into helping to organize Joomla User Group Chicago North (JUGCN).  I am a bit of an introvert and it took lots of deep breathing to calm my nerves to walk into the event.  I was awestruck.  The people I met and still talk with today, the information I learned, and the ideas that just being there sparked, set me on the journey that I am now on.  I felt I'd been accepted as part of a caring and knowledgable community.

Ever since my first event 6 years ago, I have been involved in the planning and execution of JoomlaDay Chicago and JoomlaCamp Chicago, taking on the lead in 2016. I'd helped with the 2015 event and followed the same model. Unfortunately, I ended up making the extremely hard decision to cancel in 2016 as there had not been enough attendees and sponsorships even with the JoomlaDay Chicago team putting in funds to cover our minimums.

It broke my heart. I'd failed my community, the Joomla community that had been so welcoming to me.

I wasn't sure how to recover.  I wasn't sure if the community would come back.  With a TON of encouragement from my JUGCN members, I tried it again, planning and executing a JoomlaDay event. I reached out to Joomlers like you asking questions.  I worked my network to figure out how to produce a JoomlaDay event at a lower cost.  I asked whoever I could think of for ideas and help (not an easy thing to do for me - asking for help).  And you know what happened?  There has been a JoomlaDay or JoomlaCamp Chicago event every year since.

Even with all of the challenges, there are today, I continue to be committed to producing an event for the Joomla community, my community. That being said, I will do what is best to keep everyone safe. As of today, June 1st, I am continuing to move forward with an eye towards us being able to meet in-person, to continue to build connections with each other, learn from each other and strengthen our community even more. My venue has not canceled us and has stated they will reach out later this month. In the meantime, I am working with my team to think of ways to help protect attendees. It is sort of a blessing that our event has been on the small side with under 50 people (though I'd hoped this year would be different) as we have plenty of space to socially distance everyone but would need to limit the number in each session. The venue already had hand sanitizer stations and such before the pandemic. Also, the team and I have been retooling the "swag" to be more PPE (personal protection equipment) friendly.

With October being several months away, it is difficult to know what our world, state, city, life, will look like.  I hold onto the hope that we can come together even if we have to wear masks to do so.

My question to you today is, will YOU come?

I know that was a big question. So, to help you to help us, there is a quick 3-question survey below Take our survey

THANK YOU for being in my community and allowing me to be in yours.

10 Reasons Why Joomla Should Be Your CMS of Choice
Congrats to RSJoomla on 13 Years
Comment for this post has been locked by admin.

By accepting you will be accessing a service provided by a third-party external to https://events.danicoenterprises.com/